The Canvas Children by Ruby Lang

A haunted painting or a clever marketing ploy? That’s the question the recent sale of an unusual artwork raised, which netted the sellers a cool $US1025 and stirred up paranormal interest on one of the Web¹s biggest Internet auction sites.

In February 2000 a young couple in California posted an interesting artwork for sale with online auction house ebay, an item they claimed at the time was haunted.

They felt strongly enough about the picture to have it stored away in an East Los Angeles vault while they sought a potential new owner on the Internet, but were compelled to tell at least part of their story as a background to the sale.

“When we received this painting we thought it was really good art. A OEpicker¹ had found it abandoned behind an old brewery. At the time we wondered a little why a seemingly find painting would be discarded like that (today we don¹t!),” the anonymous seller wrote online. “One morning our 41Z2 year old daughter claimed that the children in the picture were fighting and coming into the room at night. Now, I don¹t believe in UFOs or in Elvis being alive, but my husband was alarmed.” “To my amusement he set up a motion-triggered camera for the night. After three nights there were pictures. The last two pictures shown are from that stakeout.”

“After seeing the boy seemingly exiting the painting under threat we decided that the painting had to go. Please judge for yourself.” On the artwork, painted between 1965-1975, the words “The Hands That Resist Him” are written in pencil across the back. Potential bidders were warned “not (to) bid on this painting if you are susceptible to stress-related disease, (are) faint of heart or are unfamiliar with supernatural events”.

“By bidding on this painting you agree to release the owners of all liability in relation to the sale or any events happening after the sale that might be contributed to this painting. This painting may or may not possess supernatural powers that could impact (on you) or change your life.” “However, by bidding, you agree to exclusively bid on the value of the artwork with disregard to the last two photos featured in this auction, and hold the owners harmless (sic) in regard to them and their impact, expressed or implied.”

The creepy tale didn¹t put off intrigued would-be buyers, who took time off from bidding for the piece to deluge the seller with questions about the artwork¹s supernatural attributes. When faced with the questions the seller backed down and declared there was never anything spooky about the artwork. “To deter questions in this direction, there are no ghosts in this world, no supernatural powers, this is just a painting and most of these things have an explanation, in this case probably a fluke light effect,” she wrote. “I encourage you to bid on the artwork and consider the last two photographs as pure entertainment and please do not take them into consideration.” The savvy buyer who claimed the painting after the 10-day auction said she doesn¹t think the artwork is haunted, rather: “When I saw the image it appeared to be something I could buy and sell for profit”. The seller added this note after the sale: “Seven emails reported strange or irregular events taking place when viewing this image, and I will relay two suggestions made by the senders. First, not to use this image as the background on (your) screen and second, not to display this image around juveniles or children.”

When I asked the buyer if she had experienced anything strange since taking possession of the painting she answered in the negative, but added: “Even people who claim not to believe in the supernatural experienced some strange feelings or occurrences (upon viewing the artwork¹s image). Maybe only a chosen few can grasp its powers.” The seller declined to answer any questions about the painting or the phenomena.

So despite, or perhaps because of, the controversy surrounding this particular artwork it was a quick sale. As for its status as a haunted object, I guess we¹ll never know ­ it has disappeared into the world of art and auctions.

Ruby Lang retains the sole copyright © 2000 for this article. 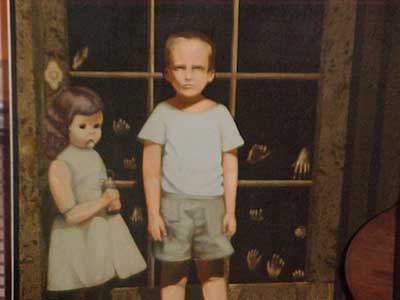