A Cemetery Attack (pictures included below)

I figured I would share my story of my psychic attack, if you will, with your visitors. Many may have read about it on another very popular site..but for those who have not, here it goes.

Over this past summer (2000), we were doing alot of investigations in eastern CT. We decided to hit this one cemetery near the Ct River near the ferry landing. Upon arrival at this particular cemetery, I was able to feel the energy before I even walked in! One of the first things I noticed when we walked in was there were ground markers all over the place. I told my husband Chris to start mapping them out to see if they ended up spelling something or forming some sort of shape. He sat on a bench in the cemetery and tooled around with the design a little and we discovered that from a certain angle, you can clearly see a pentacle in the stones.

When we approached one end of the cemetery, we noticed a hedge there. Being the curious ones that we are, we looked over the hedge. On the ground were three tombstones. So, of course we went over the hedge and took some pictures. Our cameras all systematically started to not work and batteries went dead almost immediately. Hmmm, pretty strong energy there. I touched one stone and I felt a burning on my back. I had to leave the area immediately. Walking through the actual cemetery, the burning got worse and worse to the point where I had to beg my group to pack up and leave. Me being the driver, they really didn’t have a choice. Well, we leave and went to a small convienience store to get a much needed cup of coffee. I called over one of the other investigators and asked him to look at my back. Sure enough, there were scratch marks all over my back. It looked as though I was whipped with some sort of whip or something. Well, that was enough convincing to me that we were calling it a night and going home.

Upon later investigation into the cemetery, I found out that the three people buried outside of the cemetery were accused but not tried as satanists back in the 1800’s. They had been bannished but the townsfolk all feared some sort of curse if they didn’t give them a proper burial. They did but not on hollowed ground. Now, there are certain Satanic groups that go to that cemetery to do rituals. My belief is that the cultists placed some sort of guardian at the cemetery to protect them from anything pure coming in to take the negative energies out. Pretty much scared the daylights out of me for awhile and I had to take a break from ghosthunting for a month or so. Not to mention, being 7 months pregnant, it was getting hard to get around anyway.

I hope this story makes some sense. Sometimes, I just end up rambling on and on about such things. If anyone has any questions for me, you can email me at ct_ghost_goddess@hotmail.com

I have pictures of the scratches and will email them to those who want to see them.

White light and peace to all…… 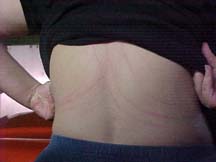 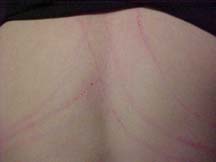