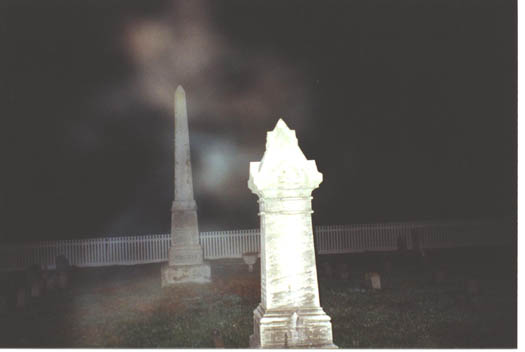 I took these photos quite a while ago when I was ghost hunting at a local cemetery. I had gone there basically every evening for a week straight and had not gotten anything. However, this particular night when I was walking around, a started to walk through dense “warm” spots. Which seems to be counter to everything I had ever read. Usually, we look for cold spots, but this was more much warmer than the ambient temperature. At one point, when I hit the warm spot, I took several photos in succession. When the flash went off, I could see a blurry mass in the light, but not visible without the flash. The photos where in quick succession and looks to me like something manifesting. That was all I got that night, but the feeling was definitely oppressive in the cemetery.

Many years ago, I was tasked with a team of investigators to investigate claims of a haunted home in Connecticut. The family had claimed that they would hear banging on the walls, the rooms would get frigid cold, and they’d see what they described as “figures that were darker than the dark room.”

The home was actually a railroad style duplex. That is, two side by side apartments that was just a straight floor plan. You actually had to walk through every room to get to the living room. It was an odd layout to me, but I’m told railroad apartments are a thing.

Once we arrived, we found a very nice family, with younger children huddled together in the living room. The children varied in age, with oldest son being fifteen years old. The family had told us that they recently moved from Florida, and after the move was the beginning of the phenomena.

As we set up the equipment, the children fell asleep together in the living room. We sat around a small round table, all of together in kitchen. It was then that the phone rang. The father answered and it was a call from 911. They asked what was the emergency? The father stated that no one had called and there wasn’t an emergency. This happened two more times, each time the operator growing more agitated. However, no one was making the calls.

At around 1 in the morning, some team members and the parents went out on the front porch for fresh air. I remained behind with another investigator, and we stood across from each other, chatting int he narrow kitchen. Next to me, there was a shelf with some kitchen items on it that included a broken toaster with the power cord wrapped around it. This toaster looked like someone had taken a baseball bat to it. Just like the printer in Office Space. As I was talking to the other investigator, the toaster slid across the shelf, stopped next to my head, and popped like there was toast in it!

I saw this from the corner of my eye and just as I asked him to verify what we had just seen, the father came running in the house. He told us to be quiet, that his kids hadn’t slept and he didn’t want us to wake them. I said we weren’t talking very loud, only in hushed tones. He said he heard us screaming for him to come inside! Of course, we never screamed for him.

We wrapped up the investigation for the evening. Upon further investigation, we found that the son had been involved in demonic rituals while they lived in Florida. He and his friends were attempting to ask spirits to help become more popular at school. (strange?) But really, they probably invited some bad entities into their lives.

In the end, an experienced lay demonologist performed a suffmunigation on the home, which is really a lay person’t ritual to remove spirits. As far as I know, all is well. They were lucky.

For the last 10 years, give or take, we at Ghosthound.com have been investigating a strange log cabin in the woods of Harwinton, CT. Located on South Road, the Roraback Wildlife Preserve is home to this mysterious structure in which we have experienced various forms of paranormal activity. Searching through miles of 35mm negatives, and more recently digital camera images have yielded many pictures of orbs, fogs, streaks, and the occasional face.

We have heard distant screams, had hair tugged, hands touched, and walked through defined warm and cold spots. A figure of a somewhat elderly man was once seen through an infrared night vision scope. One fellow ghost hunter even suffered a minor attack. His back was scratched, in a row of four, from his shoulder to his hip, badly enough that it was red, swollen, and raised.Stories of ax murders and such circulate, as they always do, but the common legend that we heard the most was as follows:There was originally a house that burned to the ground, killing the family. The land was bought by another family, who built the log cabin. The man then went insane and killed his entire family, then himself. The property was then bought by a priest, who converted the cabin into a church, and was later crucified at his own altar. That seems like an awful lot of tragedy to happen in this one place.

It would stand to reason that given the history of the land no one, not a priest, or a homeowner would want to buy this place. Legends of haunted houses and such are often exaggerated, distorted through time, or sometimes just made up. This story seemed to us no different. Still, our investigations have been productive, which left us with activity but no answers. Until now.After digging through some online public records, we uncovered a newspaper article from 1937, which gave us a really big piece of the puzzle, and pointed us in a new direction. As it turns out, the 3,300 acres now known as the Roraback Wildlife Preserve was once a farm, but was purchased by John Henry Roraback, one of the most powerful politicians of the early 1900s, and founder of Connecticut Light and Power. Roraback bought the land for hunting. According to the Time newspaper dated Monday, May 31, 1937, Roraback took his own life with a handgun shot after a morning of target practice.

The 67 year old man had been battling streptococcus infection for over a year, and acted out of free will, not mental instability. Years later the Rorabacks, a powerhouse family of lawyers and politicians donated the land to the state.With answers, more questions are raised. The biggest being, is this cabin in the woods of northern Connecticut the hunting lodge that John Henry Roraback committed suicide in? What were the details of how he was found dead? Powerful politicians are often targets for assassination. Could he have been murdered, and mistaken for a suicide? In these 3,300 acres, is there another structure? Who can we contact for reliable answers? Is it possible that the image in the night vision scope was the ghost of Mr. Roraback?

We hope to find more answers, even though they inevitably lead to more questions. If anyone can provide us with answers or at least point us in the right direction, or guide us to anything else in those woods, please contact us.

Just listening to the Conjuring episode. Thanks for the shout out @BPFPod haha! I’m famous now!

Had a great time with Mrs Ghosthound at Trumbull Library for @THEJeffBelanger lecture. Excellent speaker!

In September, paranormal sightings suddenly spiked at the largest haunted house in the country. Tune in live this Tuesday, October 16, at 10pm EST / 7pm PST to help a team of investigators at the Winchester Mystery House find out why. #ProjectDeadZone

Over 20 minutes of GHOSTS! Watch with the lights out, just before bed. SWEET DREAMS!
https://t.co/ny4f1Zif02