For the last 10 years, give or take, we at Ghosthound.com have been investigating a strange log cabin in the woods of Harwinton, CT. Located on South Road, the Roraback Wildlife Preserve is home to this mysterious structure in which we have experienced various forms of paranormal activity. Searching through miles of 35mm negatives, and more recently digital camera images have yielded many pictures of orbs, fogs, streaks, and the occasional face.

We have heard distant screams, had hair tugged, hands touched, and walked through defined warm and cold spots. A figure of a somewhat elderly man was once seen through an infrared night vision scope. One fellow ghost hunter even suffered a minor attack. His back was scratched, in a row of four, from his shoulder to his hip, badly enough that it was red, swollen, and raised.Stories of ax murders and such circulate, as they always do, but the common legend that we heard the most was as follows:There was originally a house that burned to the ground, killing the family. The land was bought by another family, who built the log cabin. The man then went insane and killed his entire family, then himself. The property was then bought by a priest, who converted the cabin into a church, and was later crucified at his own altar. That seems like an awful lot of tragedy to happen in this one place.

It would stand to reason that given the history of the land no one, not a priest, or a homeowner would want to buy this place. Legends of haunted houses and such are often exaggerated, distorted through time, or sometimes just made up. This story seemed to us no different. Still, our investigations have been productive, which left us with activity but no answers. Until now.After digging through some online public records, we uncovered a newspaper article from 1937, which gave us a really big piece of the puzzle, and pointed us in a new direction. As it turns out, the 3,300 acres now known as the Roraback Wildlife Preserve was once a farm, but was purchased by John Henry Roraback, one of the most powerful politicians of the early 1900s, and founder of Connecticut Light and Power. Roraback bought the land for hunting. According to the Time newspaper dated Monday, May 31, 1937, Roraback took his own life with a handgun shot after a morning of target practice.

The 67 year old man had been battling streptococcus infection for over a year, and acted out of free will, not mental instability. Years later the Rorabacks, a powerhouse family of lawyers and politicians donated the land to the state.With answers, more questions are raised. The biggest being, is this cabin in the woods of northern Connecticut the hunting lodge that John Henry Roraback committed suicide in? What were the details of how he was found dead? Powerful politicians are often targets for assassination. Could he have been murdered, and mistaken for a suicide? In these 3,300 acres, is there another structure? Who can we contact for reliable answers? Is it possible that the image in the night vision scope was the ghost of Mr. Roraback?

We hope to find more answers, even though they inevitably lead to more questions. If anyone can provide us with answers or at least point us in the right direction, or guide us to anything else in those woods, please contact us. 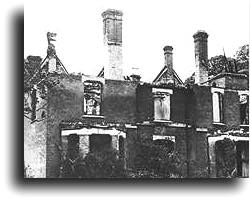